Sometimes the day is just rotten, you know?  MOUSES!

So I was listening to the news on TV and there were these reporters complaining that the Prime Minister wasn't allowing National reporters to ask him any questions at some...  some...  some thing he was doing.  An appearance of some sort.  He was only letting local reporters ask questions and even they weren't getting to ask very many.  Hearing this, I thought to myself, this could be a problem for me.

After all, I'm not just national.  I'm far bigger than that.  I'm INTER-national! Nerissa's Life has a global audience, you see.

And then there's the bit about my being a cat.  Something tells me the Prime Minister has never answered any questions from a feline reporter, before.  He never once answered any of Nissy's tweets and Nissy was the best darned tootin' reporter the world has ever seen.  Bet the PM didn't answer his tweets on account of his being a cat.  That's specism, that is.  MOUSES!

Not that I'd want to be anything else.  Being a cat is the best.  I should know because...  Because I am one.

But if I ask only the questions I'm allowed to ask, will I still be a good reporting kitty like Nissy? I think not.  Reporters have to ask the hard stuff and be willing to dig in the dirt.  You know what I mean?

Good thing the letter I'm in the midst of writing is to the Premier and not the Prime Minister.  I'm betting he'll answer my questions.  Bet he'll answer them all.  MOUSES!

So that was the start of my day.  A shock to my system about the question asking thing, for sure. And that was on top of the fact that it was a publishing day for my blog and I didn't have a thing about which to write.  MOUSES!

Then came my conversation with Rushton.  He came into my office while I was pouring through newspapers and stuff, looking for things in the news.  Looking for inspiration.  Something I could write about for today's blog post.  I explained this to Rushy and he immediately told me that he knew of some news I could use.

So I went back to pouring through the local paper, all the while thinking to myself, I bet the reporters writing for this paper would be allowed to ask the Prime Minister questions on account of their being local, not to mention the fact that they're peeps.

I read in the police blotter report kind of thingy in one local paper that some armoured guards had to call the police on account of their accidentally locking themselves inside the bank* or something like that.  It occurred to me that that's just the kind of thing that could happen to my Peep #1 if she were an armoured guard but since she isn't, it probably wasn't her.  MOUSES!

Actually, I'm pretty glad it wasn't my peep on account of such an incident being really embarrassing.  I don't know how a kitty can face the neighbourhood kitties after their peep does something silly like that.  It's enough to make a kitty the laughing stock of the neighbourhood, for sure.

At some point later on, Anderson came into the room looking for his copy of the book he, Rushton and I are reading for our Kitty Lit. 101 course.  The book we're supposed to be reading.  Andy hasn't started reading his yet.  I, on the other paw, am almost finished mine.  Unfortunately, Andy's slacking wasn't news, either.

I tossed Andy's book at him and he caught it, mid-air.  He then trotted out of my office like a puppy carrying a prize.

I gazed out my office window, hoping inspiration would hit me.

That's when Rushton came running in, skidded to a stop and slapped me on the back of my head.  I momentarily wondered if Rushton was, in fact, inspiration herself.  Momentarily, mind you.   I came to my senses quickly enough.  Rushy is a boy and I'm pretty sure Inspiration is a lady.

I peered at my brother and narrowed my eyes.  "You sure you want me to tell the world what you weigh?  The nurse weighed you, remember?  And remember the look on the doctor's face when she saw it written down?  Before she realised that was including the carrier, that is.

Rushton and I decided that blogging about our doctor's appointment would not be news after all even though we were both very good and no peeps were harmed during the visit.  And I'd just like to point out that Rushy weighs a whole pound more than I.  He's claiming it's all floof but I have other suspicions.

Needless to say, I overheard the peeps talking about encouraging Rushy to go for more walks with them around and about in the yard.  MOUSES!

I closed my eyes and scrunched up my nose.  About what could I blog?  What?  WHAT?  I had nothing on paw.

Peep #1's sweet peas are blooming.  Nothing newsworthy about that.  It's raining again.  Pouring, in fact.  Most definitely nothing newsy about that.  Constance ate a mosquito.  Hmm...  Could I write a blog post about a mosquito eating cat?

Nah, I had nothing.  NOTHING.  Nadda.  Not a thing.  My mind was as blank as the computer screen before me.  MOUSES!  What was I going to do?  Was I going to write about nothing at all?

Could one write a blog post about absolutely nothing?  Hmmm...

And that's when it hit me.  Inspiration, that is.  Not Rushton re-entering the room. 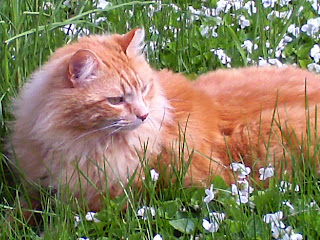 Yup, Inspiration whacked me on the side of my head on her way out.  She whacked me in the head as she walked out of my office, muttering something about checking out Vegas with Old Lady Luck.  MOUSES!

It occurred to me then that I could offer my teleportation services for a small, modest fee.  "You need transportation to Vegas, ladies?  I'll teleport you over for a mere fifteen percent cut!  Twelve? Ten?  Nine?  Awww...   MOUSES!"

So that's my blog post for today, my friends.  A post about nothing.  Nothing at all.  I'm hoping to do better on Wednesday.  MOUSES!