So the peeps decided they'd go out for lunch yesterday.  Go out to this restaurant about forty-five minutes away.  It's in an inn that's in a big old house and they figured if it was all decorated up for Christmas, it would be really, really pretty.

The second peep called 'em on the phone and asked if they had Christmas decorations up and if they were open for lunch.  They did and they were so yesterday, the peeps headed off to enjoy a lunch on the town.  Well...  in the inn 'cause quite frankly, I don't know how one has lunch on the town.  Sittin' on the steps of Town Hall?  Would that do the trick?  Kinda chilly in December to be lunchin' outside on the steps of Town Hall. Especially in Canada, if you know what I mean.  MOUSES!

Perhaps Peep #2 should also have asked 'bout makin' a reservation for when the peeps pulled into the parkin' lot of the inn, the parkin' lot was full.  And when I say full, I mean FULL.  Not a single parkin' spot was available.  Not a one.  Apparently, there was no room at the inn.

Although I bet had I been drivin' a cat-sized car, I could have squeezed in there between two of those already parked cars but since I don't have a cat-sized car, I couldn't do that.  Also, I don't know how to drive.  Teleport, yes.  Drive, no.  I should learn.  Maybe I could teach that ol' car of ours how to drive somewhere other than my doctor's office.  You may not be able to teach an ol' dog new tricks but I'm a cat - not a dog - and I'd be the one doin' the teachin'.  Plus, it would be a car learnin' the tricks.  No dogs would be involved.

Anywho...  The peeps didn't even bother goin' inside.  Didn't even get out of the car.  How could they?  There was nowhere left to park.  Best not to jump out of movin' cars, I should think.  Good to know my peeps understand that.

All that time wasted, goin' all that way, for nothin'.  MOUSES!

They had a real dilemma on their paws, those peeps o' mine.  Find some place else to eat or just come straight back home.

In all honesty, they should have returned home - immediately - for while they were mutterin' and mumblin' about not havin' had lunch, we cats were doin' the very same thing, here.  Oh sure, the peeps had put food out for us before leavin' but that's not the same thing as havin' your peeps right there, by your side, waitin' on you, paw and paw.  It's not the same thing at all!

What if I didn't want that particular kind of food?  What if I wanted somethin' else?  Who was gonna make the necessary changes?

What if one of my fur-sibs tried to hone in on my lunch?  Who was gonna stop them?

And where was my nip garnish on the plate?  WHERE?

Okay, so the peeps have never once garnished my luncheon plates with nip but really, I think they should start.  Nice to dress up the meal a little, you know?  Make the plate look pretty and everythin'.  Show that you care.

I bet Martha Stewart would add a nip garnish.  Bet she would, for sure.

And what if I needed a tummy rub or a kiss on the back of my head before startin' to eat?  Sometimes I need that. It's true.  Sometimes I do.  With the peeps bein' so far away, how were they gonna do that for me?  How would they even know I was needin' that tummy rub?  MOUSES!

Anywho...  The peeps decided to return home without havin' lunch but first they were gonna stop at this big discount kind of store thingy on the way.  I wonder if they knew they were delayin' my tummy rubs.  Bet they did.  Bet that was their plan.  Probably their plan right from the start.  Again I must say, MOUSES!

They say that what doesn't kill you will make you stronger.  Well I say, lunch without tummy rubs and kisses on the back of my head might just very well kill me.  I mean, a cat could STARVE waitin' for his tummy rubs.  The very thought of it makes me weak with hunger.  Too weak to even say...  you know...  MOUSES!

Hours and hours AND HOURS passed before the peeps finally arrived home.  That's right, they were gone for hours!  Must have been at least four, I think.  Don't know how we cats survived.

Those peeps of mine arrived home a little on the grumpy side.  Apparently, peeps who miss their lunches get grumpy.  Who knew?

The first thing Peep #1 did was scoop me up into her arms.  Then she showed me the book she found at the big discount store thingy.  It was a cookbook.

Now before you get all excited there, cookbooks themselves cannot be eaten for lunch.  They're not even good for snackin'.  Little on the dry side, if you know what I mean.  Nothin' but tasteless fibre.

I did perk up my ears a bit at the thought of the peep gettin' a cookbook, though.  Thought maybe she was finally gonna learn how to make my lunches a little more appetizin' by dressin' up the plates with sprigs of nip.  I thought to myself, there's hope for the peep yet!

But the cookbook in question turned out to be a dud.  It was book on cookin' vegetables. VEGETABLES!  Could you believe it?

It's true.  On the cover was a picture of some veggies and the book's title even included the word vegetables, itself.  VEGETABLES.  What good is that?

But being a rather optimistic kitty, it occurred to me that perhaps the author of the book considered catnip to be a veggie like lettuce and kale.  Perhaps he had included some nip recipes.  Perhaps there was a whole chapter on cookin' with the nip.  I scanned the table of contents.  Nothin'.  I carefully looked through the index.  NOTHIN'.  Nothin', nadda, nadingcompoop.  MOUSES!

In fact, poring through the index, I discovered that there wasn't a single good recipe in the lot.  Not only were there no recipes for nip but there were no recipes for anythin' good.  No fish, no poultry, no meat of any kind.  It was just vegetable after vegetable after vegetable.  NOTHIN' BUT VEGGIES.  I'm a cat.  Cats don't eat veggies.  Awww...  MOUSES!

The peep had brought home a totally useless book.  And she had even had the nerve to show it to me.  Why?  WHY?  It's like she was rubbin' salt in my wounds or somethin'.  There I was, practically starvin' from the lack of tummy rubs with my lunch and she's showin' me a book filled with recipes usin' nothin' but veggies.  Oh I have a very mean peep, for sure.

Well in retaliation for leavin' us cats alone to fend for ourselves for four whole hours while they had a good ol' time grumblin' and mumblin' about not bein' able to have lunch themselves, I'm grading 'em.  That's right, I'm giving the peeps stars showin' exactly what I think about their latest performance.  I'll give 'em a star for returnin' home...  eventually.  Gotta give 'em credit for that. And I'll give 'em a star for leavin' our lunches out before they left although there were no accompanying tummy rubs, kisses on the back of the head and not a nip garnish in sight. 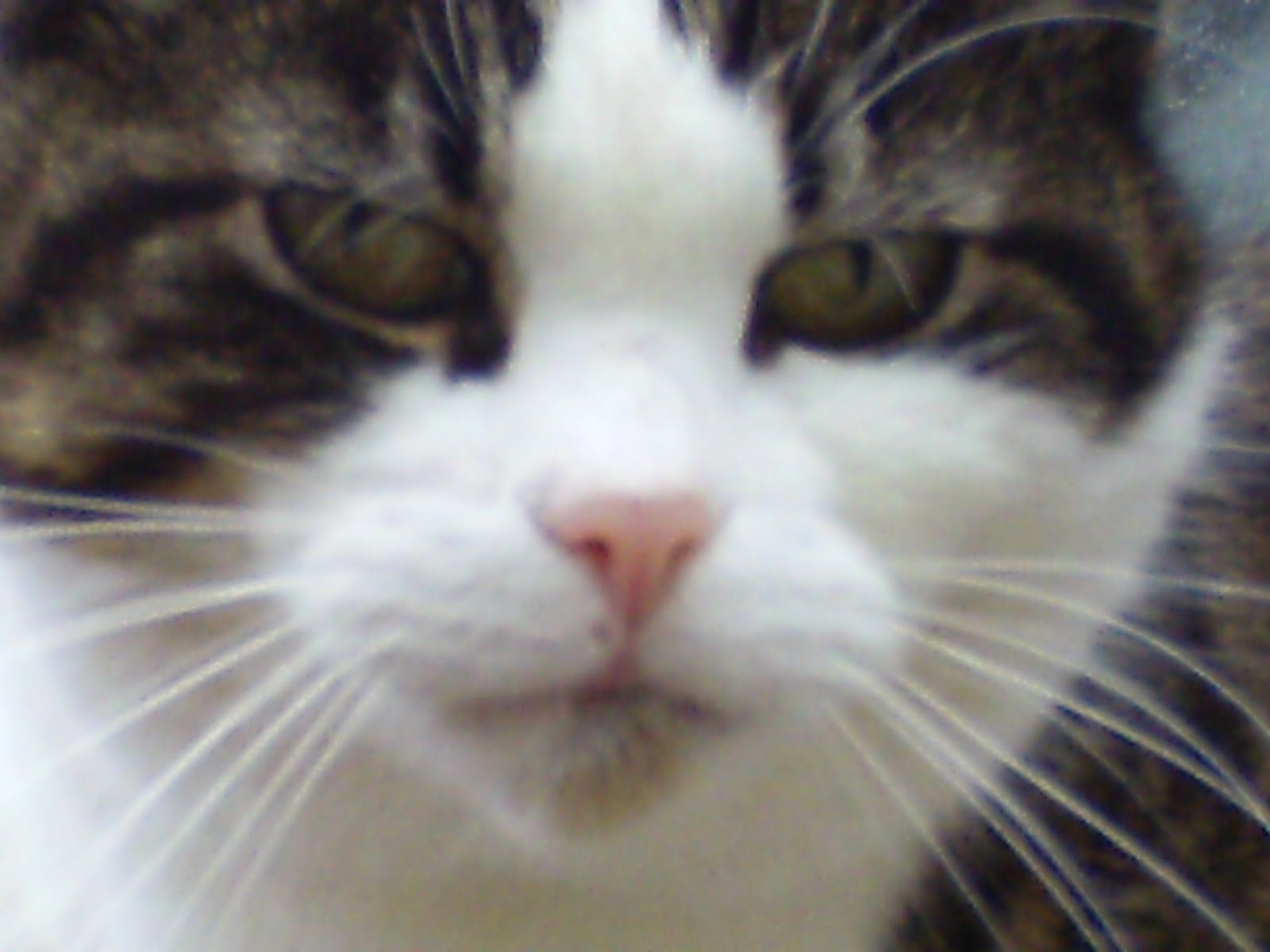 Sorry Peepers but you're gettin' two stars out of five.  Yup, two stars at best.

But all is not lost.  Think of this way, Peepers.  Two stars out of five leaves you a lot of room for improvement. Lots and lots of room, for sure.  Let's hope that next time, you pick up at least one more star to give you a passin' grade.

Email ThisBlogThis!Share to TwitterShare to FacebookShare to Pinterest
Labels: catnip, cats, Christmas, humor, humour, lunch on the town, lunch reservations, Martha Stewart, no room at the inn, two stars out of five