gonna be a big day 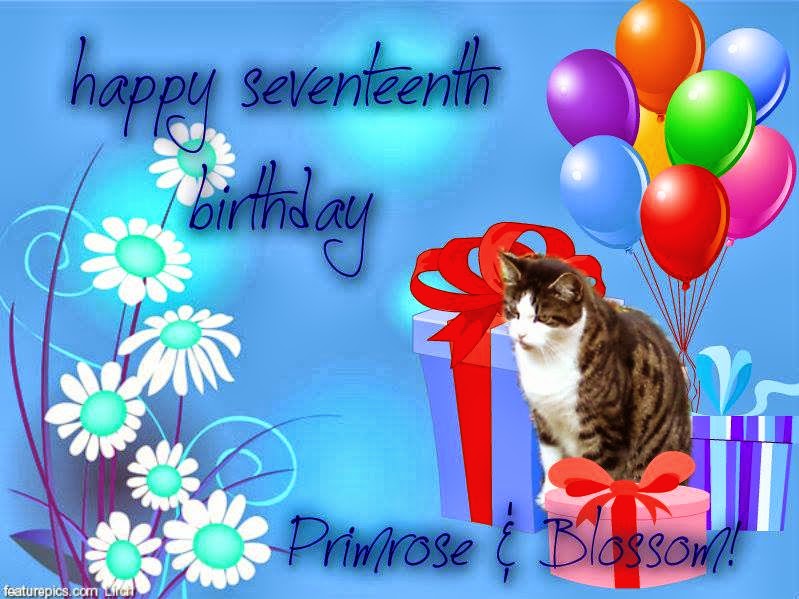 Tomorrow is gonna be a big day at my house.  A really big day, for sure, and do you know why?


Tomorrow is gonna be a big day 'cause tomorrow, we're havin' a birthday. Tomorrow, my Aunties Primrose and Blossom are gonna be seventeen-years-old.  Can you believe it?  SEVENTEEN.

I don't know what the peeps have planned or anything.  Don't know if we'll be havin' a party or not but whatever we're doin', I suspect there will be nip.  Yup, you can't celebrate a seventeenth birthday without a little nip. I think it's a law or somethin'.  And if it isn't already a law, it sure should be.

Since my aunties are gonna be turnin' seventeen and all, I thought I might tell you about some of their uh...  ummm...  escapades?  Yeah...  escapades.  That's a good word for it, I should think. Let's see...

The following are true stories, told to me by my peeps.

As you probably know, my Auntie Primrose has a bit of a reputation with the local doctors.  You do remember my post entitled, "bloody Wednesday," do you not?  Truth be told, I suspect that some of the doctors arrange their vacation schedules around Prim's check-ups.  Nothin' better than bein' on another continent when Auntie Primrose is due for her vaccinations.  I also suspect that some doctors have even changed fields due to encounters with the Prim.  There was the one who went to work for the Department of Fisheries and then that other one who decided to train further in order to specialise in birds only and then that other one who just up and moved.  MOUSES!  Exactly what has my Auntie Primrose been up to?

Once, when Auntie Primrose was seein' the doctor, just for some shots I think, the nurse stood out in the hallway and said to my Peep #1, "I'll just stand out here in case she makes a lunge for me." MOUSES!  You'd think my auntie was a lion or somethin'. 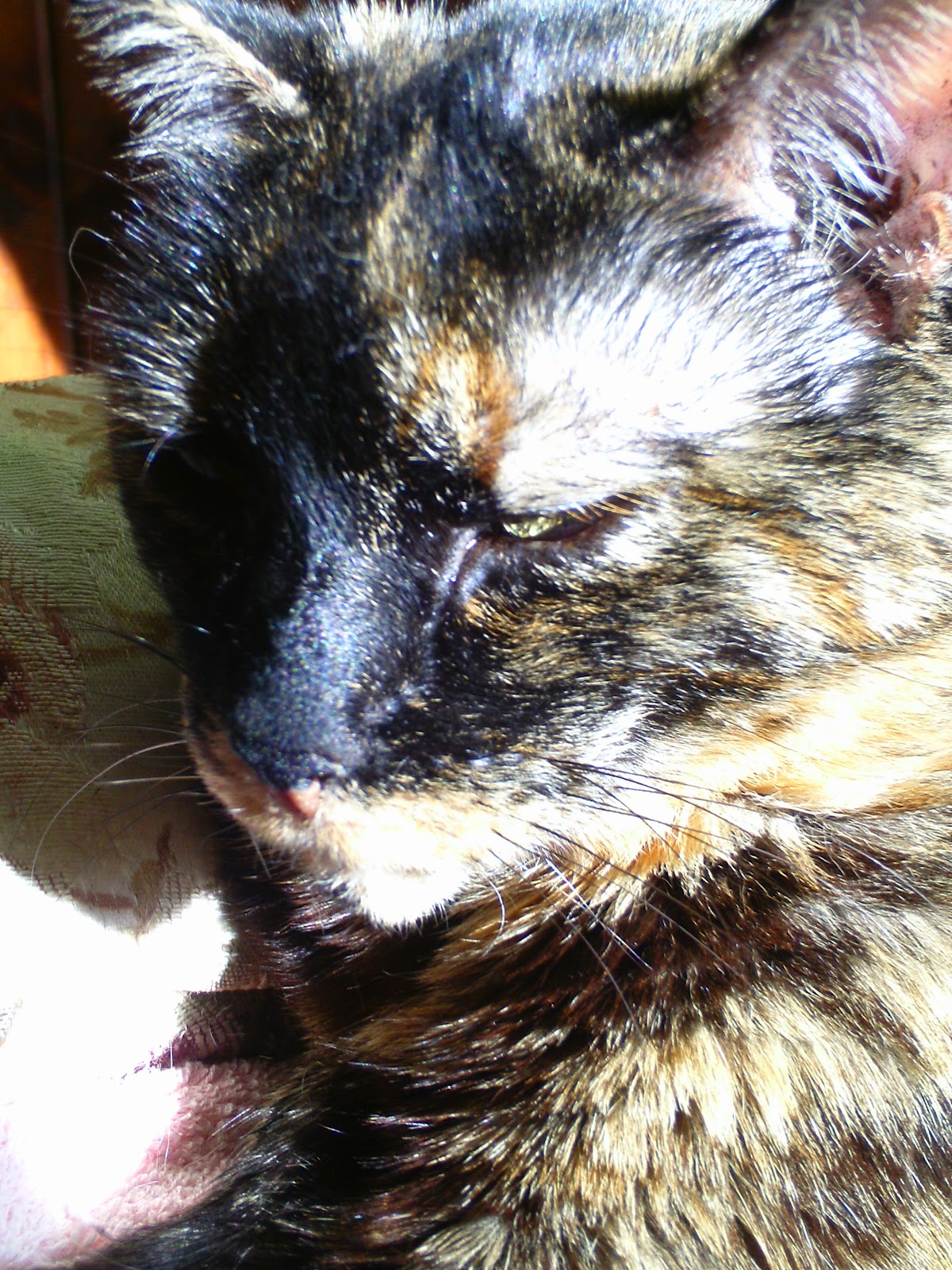 This, by the way, was the very same nurse who used to make Peep #1 hold Primrose whenever anything was bein' done and once, when they needed to put her under to get a urine sample, my peep had to apply the gas 'cause the nurse was too scared of Primrose to do it. Of course, that particular nurse was also afraid of mice.  Imagine bein' afraid of a little mouse.  Talk about a scaredy-cat.  No self-respectin' cat would ever be afraid of a little mouse.  No, only peeps are afraid of mice.  MOUSES!

We don't go to that hospital anymore.

But the doctors at that hospital were super good even if a little nervous of my aunties.  There was this one time when the doctor just couldn't get close enough to give Auntie Primrose her vaccines.  He tried and tried and tried but Prim was havin' nothin' of it.  She didn't even want Ol' Peepers to hold her.  She was all over the place. Finally, the doctor suggested that, in the basement, they had a net they used to catch wild animals. Perhaps that would work?

Well, when the doctor was off in the basement lookin' for the net, Peep #1 caught Primrose and picked her up in her arms.  When the doctor returned, he found my Auntie Primrose nestled in, with her face buried in the crook of my peep's arm.  Luckily, what can't be seen, can't be feared so the doctor was able to come from behind and give Primrose her vaccinations without Primrose ever knowin' it was happenin'. 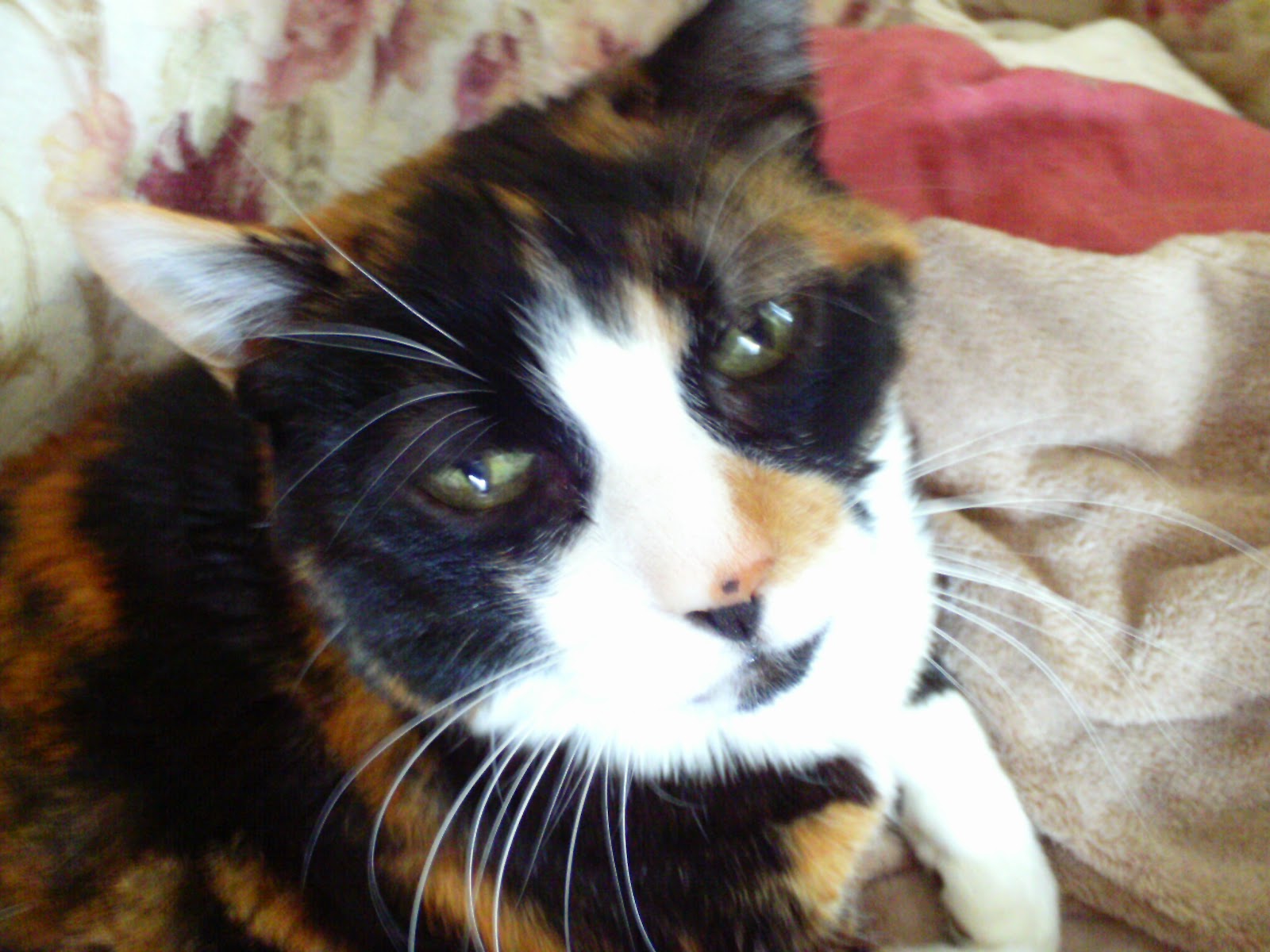 Apparently, these behavioural issues all began in their kittenhood.  My aunties all went into hospital together to be spayed.  Auntie Snowdrop was alive then so there were three of them.  All three were given a sedative before goin' under for their operations but they must have known somethin' was up 'cause when the nurse reached into the cage to bring one out and into the operating room, the other two rose up like snakes, hissing and spitting.  Do snakes spit?  Hmmm...  I've never seen a snake spit but that's what the doctor told Peep #1 the next day when she went to pick 'em up.  He also told her, he had used stitches that would melt on their own and that she needn't bring them back to have any stitches removed.  I wonder why...

You should have seen the look on that very same doctor's face when shortly afterwards, my Auntie Snowdrop was brought in 'cause she had torn a stitch climbing up the coats and jackets in the hall closet.

Although Primrose is the most feared by doctors far and wide, Auntie Blossom has had her moments.  Like that time when our new doctor made the mistake of reaching into the carrier to pull Blossom out.  Normally, this would be a perfectly reasonable thing to do but let's face it, when my aunties are involved, normality doesn't always apply.  There was hissing and there was spitting and I'm pretty sure an attempt to slash human skin was made.  That was when a nurse was brought in to help get a hold of Blossom.  A nurse wearin' those long leather gloves like you'd wear if you were wantin' to hold an eagle or somethin'.  MOUSES! 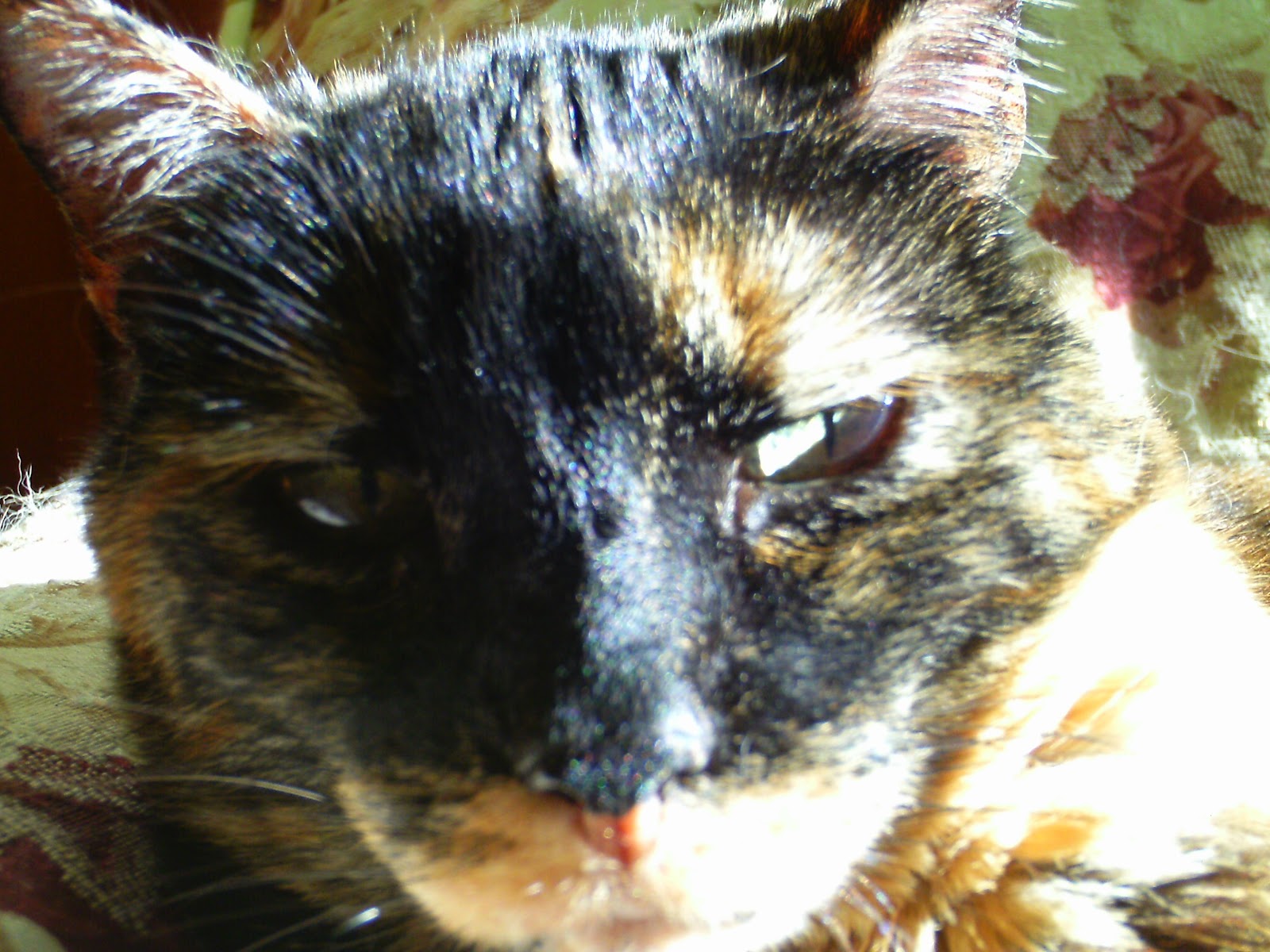 And, I believe, she pooped.  My Auntie Blossom, I mean. Not our doctor.  Not the nurse, either.  Auntie Blossom pooped right there in the carrier as the doctor and nurse with the long leather gloves were gettin' her out of it.

Yup, that's the ol' standby of my aunties when visitin' the doctor...  poopin'.  And, they tell me, it's best if it's super stinky poop, too.  The stinkier the better, they say.  My aunties swear that that's the best way to distract a doctor or two.

They've pooped in their carriers, on the exam table and once, my Auntie Primrose even pooped outside in the waiting area.  Imagine that.  She got herself into position right in the middle of the floor and...  well...  she pooped.  There was some person there, whom my peep didn't know, who thought she should inform Peep #1 that it appeared to be that Prim was gettin' ready to do her business. Ummm...  yeah...  like my peep didn't already know that.  MOUSES!

At home, my aunties are actually very well behaved.  They never hiss or spit at the peeps at home. Sometimes at the rest of us cats, sure...  but never at the peeps.

Once, Auntie Blossom did lead Peep #1 on a wild goose chase when she was up on the roof of the house, cryin', and the peep thought she was stuck under the deck and Peep #1 went crawlin' about under the deck lookin' for her and dodging spiders but that's another story for another day. 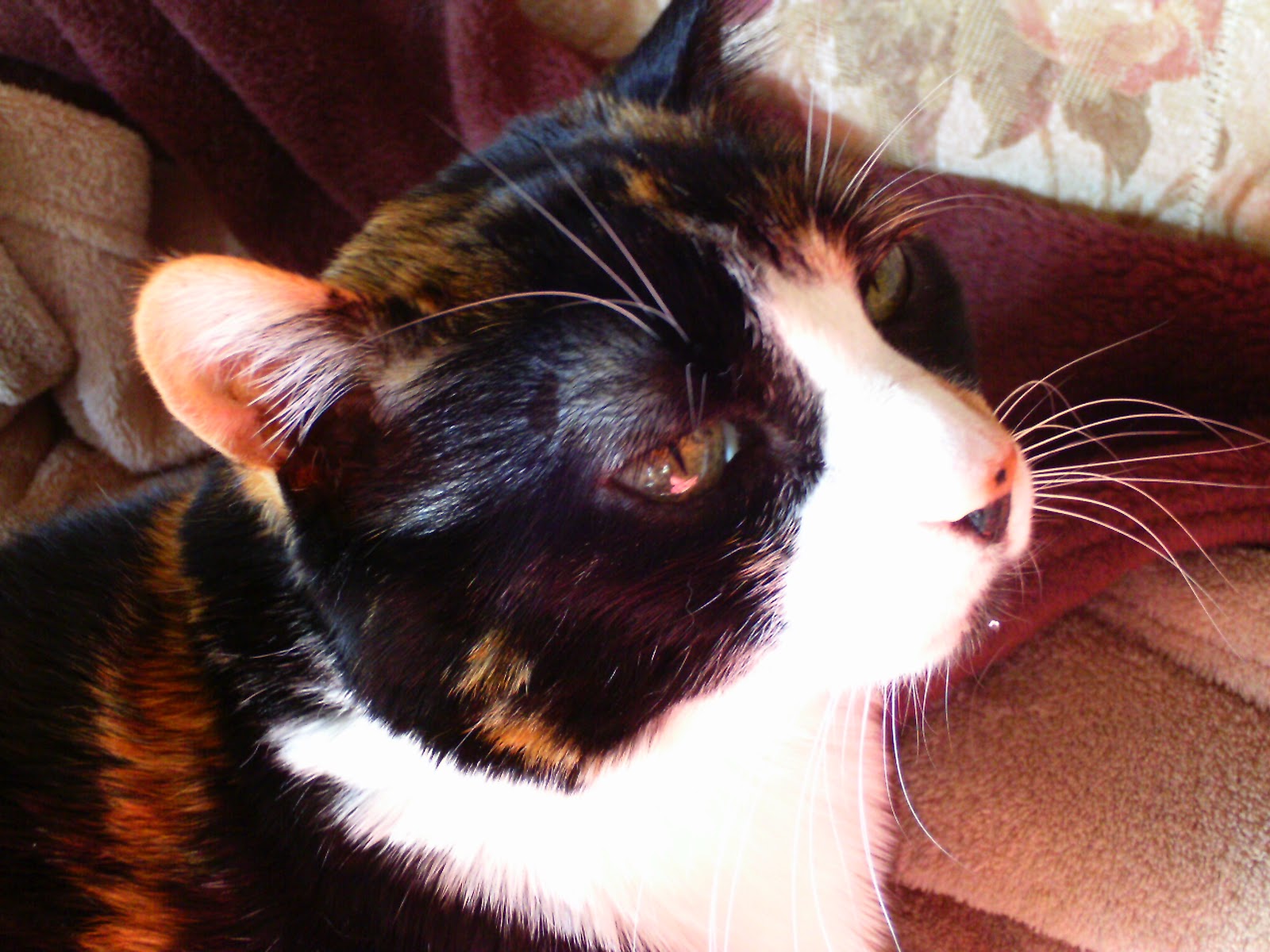 Oh, and then there's that time when Auntie Primrose really did get stuck under the deck 'cause she panics sometimes and the snow was blockin' her way out and she kind of forgot how she got in under there in the first place but that, too, is another story for another day.

Maybe I'll blog about those escapades on my aunties' next birthday, next year.  Yeah...  good plan.  Great plan. Fantastic plan, for sure.

In the meantime, please join me in wishing my Aunties Blossom and Primrose a VERY HAPPY SEVENTEENTH BIRTHDAY.  May their day be filled with love & cuddles and treats & nip.  Lots and LOTS of the nip.

Posted by Seville at Nerissa's Life at 12:26