An awful lot of North America has been stuck in a deep freeze and Nova Scotia is no exception.  Sure, we had one really mild day when it rained and some snow melted but twenty-four hours later, winter came back with a vengeance. Nothin' but snow and ice around here now.  Snow, ice and freezing temperatures.

At times like these, I worry about all the kitties livin' outside without homes. Having been born feral myself, I fully understand the dangers of being outside when the temperatures drop.  We cats may have fur coats but we are most definitely not impervious to the cold.

I was super lucky 'cause although born feral, I was born in mid-April and managed to get myself a home by the end of my first summer.  I know all about the cold but most of my knowledge has come from lookin' out at the snowy land that is Canada from the inside of a warm, comfy house.  Of course, I do go out in the snow now and then.  A cat like me has explorin' to do, you know.  I regularly venture outside to check out some stuff here and there in my yard but I always make sure I'm back inside before my tootsies get too chilly.

Once inside, after an outing in the cold temperatures, I do the heat transfer thing.  Ever do that?  It's really fun.  Immediately upon your return, go over to a peep and get them to pick you up.  Pick a peep with bare skin, visible.  Bare arms work best but the skin around the neckline will do in a pinch. Then place your cold paws on the peep's bare skin.  The heat from their skin transfers to your paws and warms them right up.  Now I'll warn you that usually the peep will complain about the cold of your paws cooling their skin down but just ignore those complaints.  I just tune 'em out.  Easily enough done. 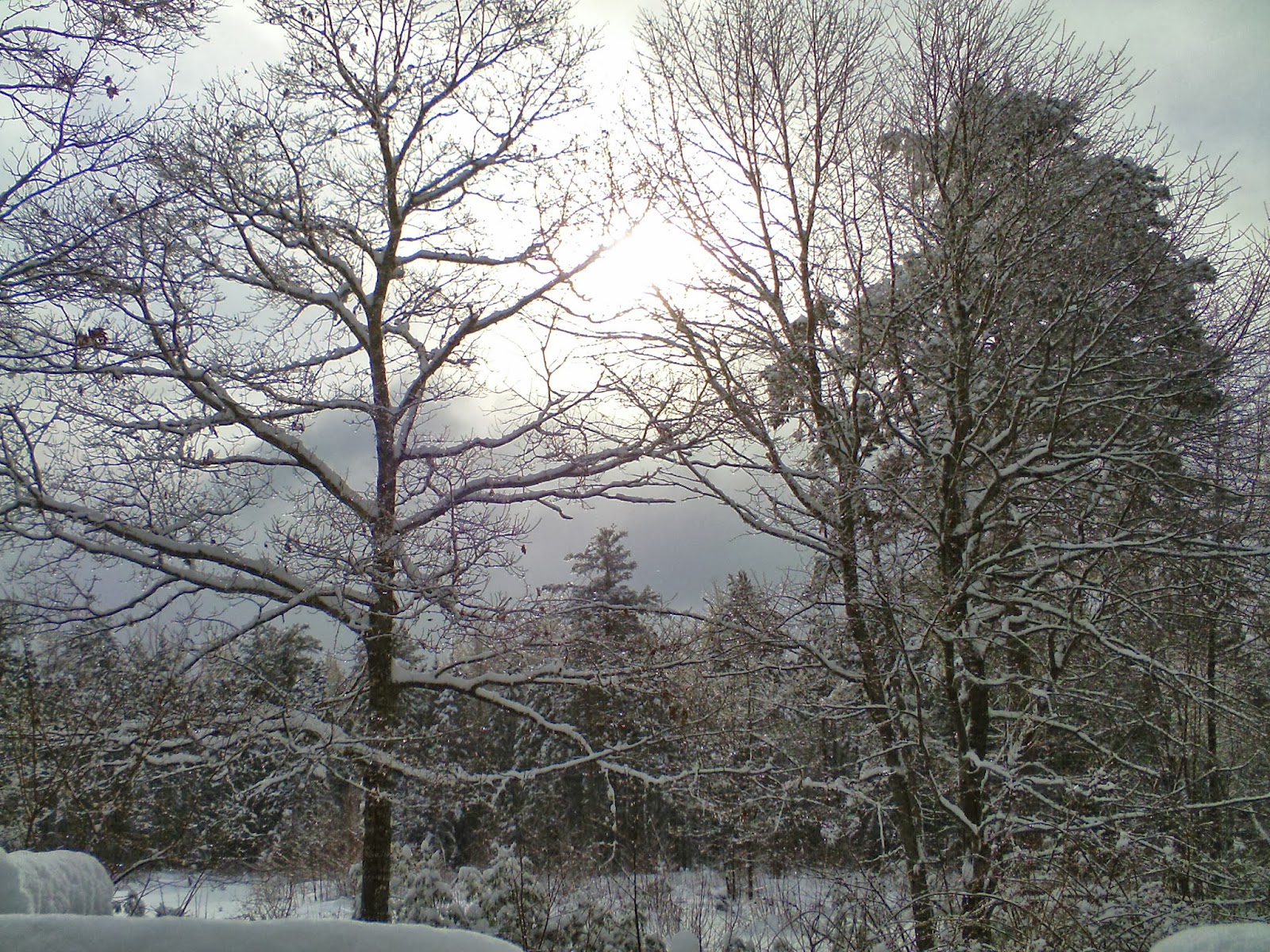 Anywho...  all this cold weather got me thinkin' about two little kitties I once knew long, long ago.  Their names were Alexander and Josephine.  I don't talk about them much 'cause my Peep #1 gets super sad when she thinks about them and how we, as a family, failed little Alex and Josie.

Alex and Josie were my younger brother and sister.  Alex was a tuxedo like my mama and Josie, inherited some orange from my dad and was therefore, a calico.  They were two cuties, for sure.

It was a very confusing time, the summer of 2003.  Peep #1 was doin' her best to get my sibs and me inside, along with my mama and dad.  I won't go into a lot of details 'cause I just know you're all gonna want to read about my rescue when it's published in the rescue anthology to which I alluded in an earlier post.  Bottom line is, before the peeps could get their act together and catch my mama and dad, mama got preggers again.  The result was that little Alex and Josie were born in early September, about four-and-a-half months after me.  Unfortunately, they were born outside.

Shortly after Alex and Josie were born, my mama was ready to come in but her babies were too scared.  Peep #1 had a really tough time gaining their trust.  It took her months and some of those months were super cold.

The winter of 2003 and 2004 was a cold one.  It started early and left, late.  There were sub-zero temperatures for long periods of time.  Very sub-zero temperatures.  I, of course, was enjoyin' the comforts of a home by then but my younger siblings were still outside. 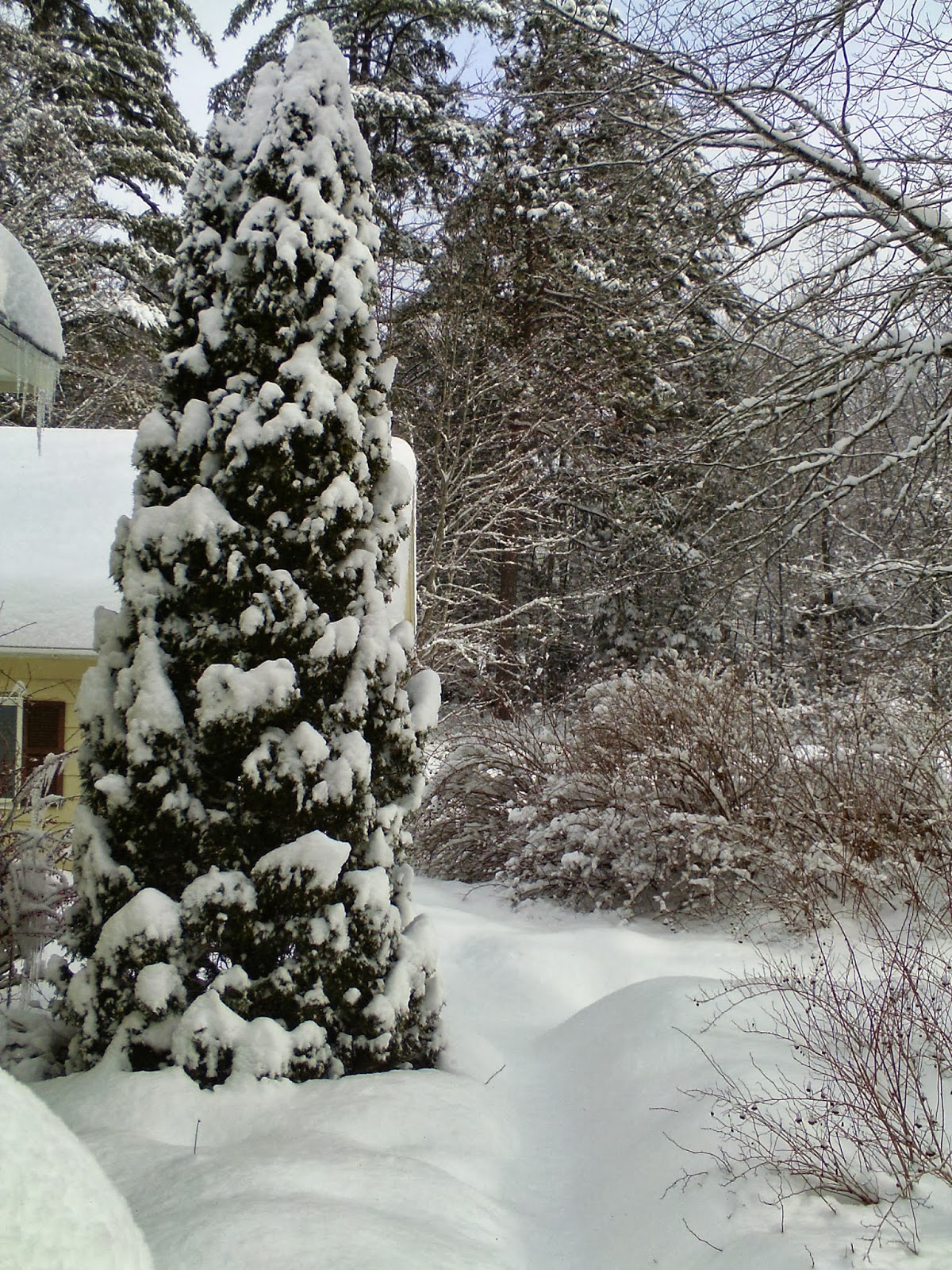 The peeps built a little shelter on the veranda.  Actually, they built two.  The first one was a big wooden box they hired a friend to build. That didn't work out so well.  All cats avoided it like the plague.  Then Peep #1 got to work and bought a big, thick sheet of Styrofoam.  She laid that down in the inside corner of the veranda and put cement blocks along the edge for weight and to make somethin' similar to walls.  Then she spread thick blankets over the Styrofoam and the cement blocks.  It worked like a charm.  Alex and Josie loved it. Every night, they would come and cosy up in their winter bedding.

Sometimes snow would drift in and the blankets would have to be changed, quite often.  Ol' Peepers changed the bedding on a daily basis to keep it clean and dry.

That winter was so cold, food and cat milk would freeze and even though the shelter had blankies, it was chilly.

So the peep developed a system involving multiple food dishes, hot water bottles, towels and an alarm clock.  Every night for weeks, the peep would use the alarm clock to wake up every ninety minutes.  Every ninety minutes, she would get up out of bed, warm up some cat milk on the stove and put that out on the veranda for Alex and Josie along with a fresh plate of soft food.  She would also fill up two hot water bottles, wrap them in towels and place them in the the home-made shelter. She would then bring inside the older dishes and hot water bottles, allowin' them to thaw out before bein' used at the next changin', an hour and a half later.

The peep found that Alex and Josie would allow her to bring out the food and hot water bottles and get quite close to them as long as she never tried to touch 'em.  She was way too scary for them to allow that.  And I can imagine that the peep was scary.  Sleep deprived, cold and cranky, Ol' Peepers must have seemed like a monster to my little brother and sister. 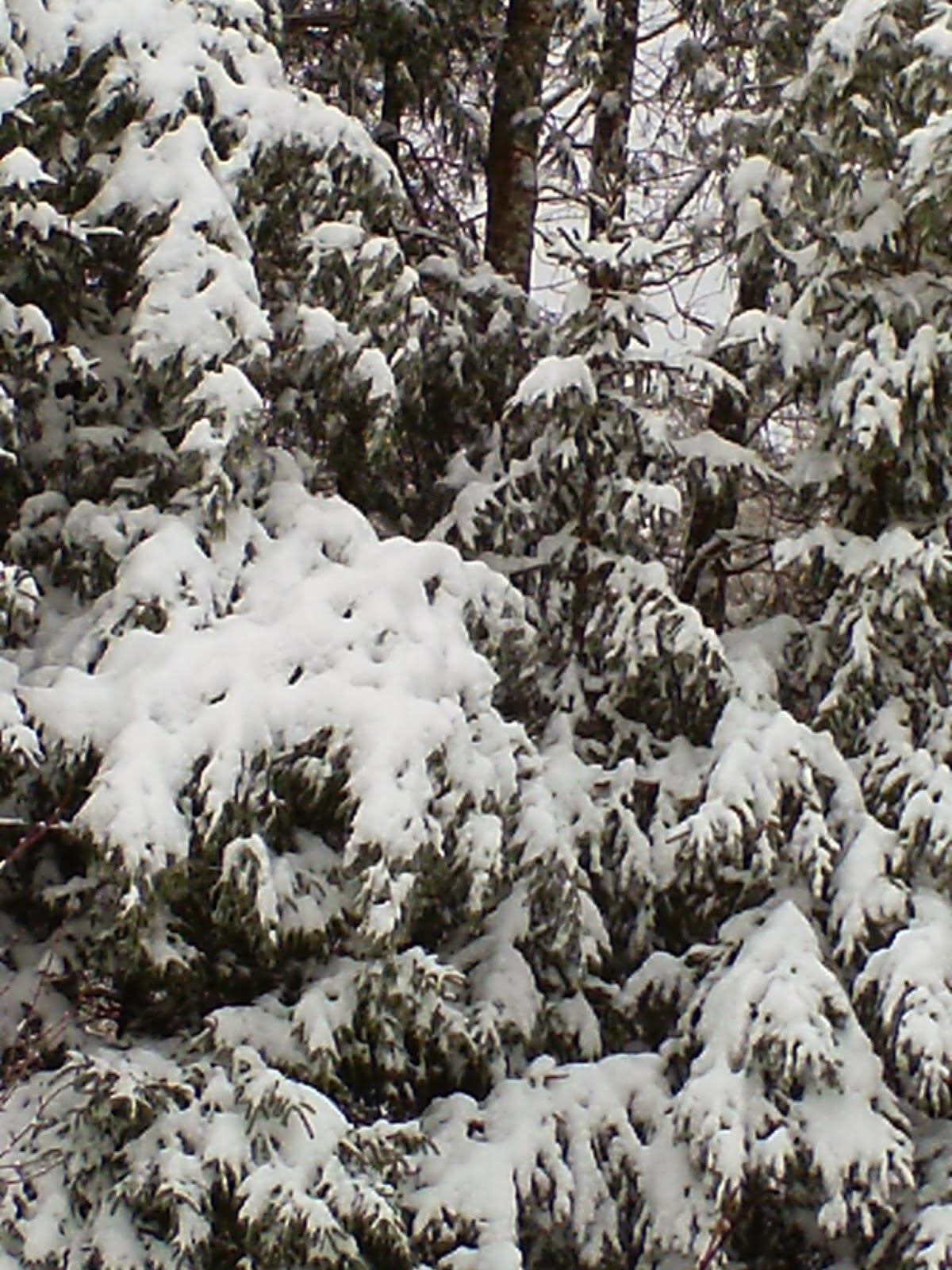 Eventually, the peep did gain the kittens' trust and Alexander was the first to venture inside.  He came in the front door, immediately hiding in the front closet.  Now I happen to know that that closet has a radiator in it.  Alex must have discovered this because he came out of the closet while the peeps were watchin' and they saw a look in his eyes that they just knew was the look of his realisation of how warm and cosy that closet was and then he turned and headed right back in.  He was an indoor kitty after that night.

Josephine took a little while longer to come in so there were a few more nights of changing hot water bottles and warming up bowls of cat milk in store for Ol' Peepers.  Once in, she never really trusted the peeps.  She was always nervous...  always scared.

Now this might sound like a happy ending for my younger siblings and really, it should have been but things don't always work out as planned.  The peeps were gettin' ready to take Alexander and Josephine in to be neutered and spayed.  They had wanted Josie to be a little more trusting of them before doin' so but it was early March and they could wait no longer.  They couldn't risk Josie gettin' preggers.  But days before their planned operations, Josie became ill.  Shortly after that, so did Alex. They weren't with us for much longer after that.

You see, livin' outside, in the cold, takes a toll on kitties.  Alex and Josie had both been exposed to Feline Leukaemia from a cat livin' two streets over, when quite young.  The peep found out about this cat a few months later but that's another story for another blog post.  Alexander's and Josephine's immune systems weren't strong and then bein' exposed to all those cold nights...  it was too much for their little bodies to handle.

I'm very thankful that when Alex and Josie left for Heaven, they were in a warm home, surrounded by love and comfort.  That's important, I think.  I'm sad though that they weren't with us for longer.

The peep says she failed Josie and Alex.  Had she managed to trap my mama before they were born, they would have been born inside a warm house and would still be with us.  But she was still tryin' to get me in, at that time and was so close to doin' so.  That's why...  that's why she didn't use a trap.  I wish she had used one.  So does she.  In hindsight, one often has perfect vision but by then it may be too late. 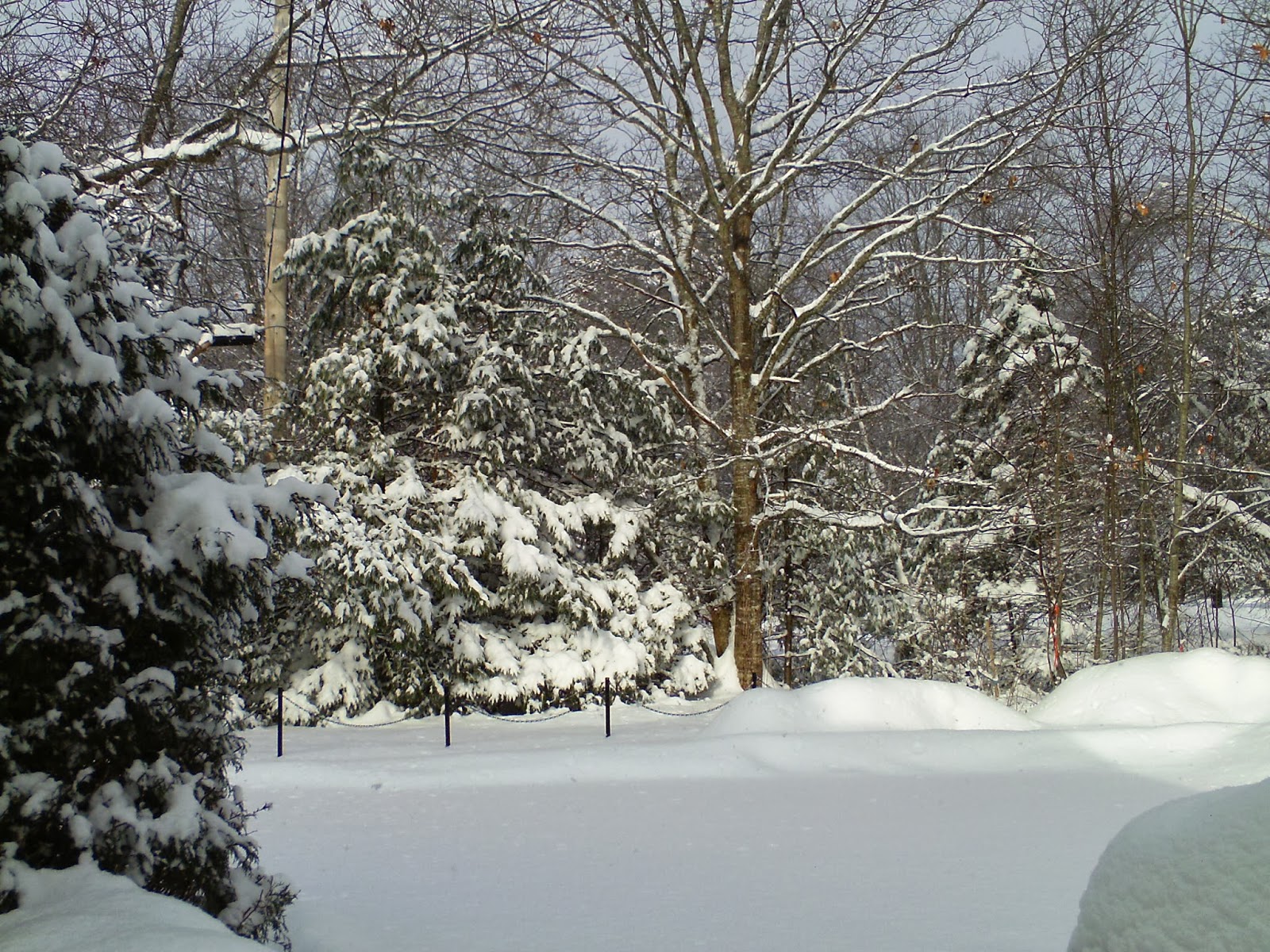 But if there is one thing to be learned from this experience, it is that kitties livin' outside in this terrible cold need our help. If you think there are kitties without homes livin' near you, please build a shelter for them.  Put out food on a regular basis, too, 'cause I assure you that mousin' is terribly difficult at this time of year.  The mice are all inside!  And most importantly, if you can get the outdoor kitties in, please make that a priority.

Please...  Please help any kitties livin' outside in this cold.  Lives are at stake.  BEAUTIFUL, PRECIOUS LIVES.

Posted by Seville at Nerissa's Life at 12:25