a blog without readers...

That's my story and I'm stickin' to it.

I love my readers.  Yup, it's true.  I love each and every one of them.  I even love Mr. Anonymous Spam.  I figure somebody has to love Spammy 'cause he must be ever-so-lonely, out there all by himself with nothin' better to do than spam us kitties.  Sendin' some love to the ol' spammer is a little bit like charity work but like I said, somebody has gotta do it and I'm up for the challenge.  MOUSES!

Anywho...  in honour of all my fantastically wonderful and special readers, Ol' Peepers promised to make me up a new award to introduce to the blogosphere once Nerissa's Life reached 75,000 hits.  That was a couple thousand hits ago so it's high time I introduce that award.  Don't you agree?  Of course you do!  So now it's time for me to get with the program and introduce the brand new FRIENDS & FOLLOWERS award.  Isn't it pretty?

And this is a super-duper, easy as peasy award to accept.  Just four things to do.  That's it.  Firstly, you need to post the award on your blog.  Secondly, you need to thank the blogger givin' it to you and, if you don't already, follow them.  You can follow by e-mail or feed or a reader or any other method available.  That even includes just checkin' in with them every day or so if they don't have any kind of followin' method set up.  Thirdly, you need to pass along the FRIENDS & FOLLOWERS award to a few readers whom you know already follow you.  To figure this out, I just went through my comments and picked out a paw full, or two...  or four.  And fourthly - which is also lastly - you need to let 'em know.  Let the bloggers to whom you've given the award know you did so.

Didn't I say this would be easy?  Would I ever lie?  NEVER.  Easy peasy, for sure.

So without any further ado, I'd like to award the FRIENDS & FOLLOWERS award to...

- Texas at Texas, a Cat in NY
- Spitty at Spitty Speaks 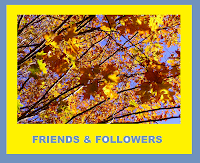 Okay...  that's twenty of you.  Surely this should get the FRIENDS & FOLLOWERS award zoomin' around the blogosphere in no time.

And now, for a word from our sponsor...

Just kidding!  It's just a little message from me.  A message and an apology.

In the last couple of months, I was given two awards.  Tex, from Texas, a Cat in NY kindly gave me the Dragon's Loyalty Award and everyone at Life with Ragdolls and Speedy over at Speedy the Cheeky House Bunny gave me the Sunshine Award.  I have not yet officially accepted these awards and for that, I owe you all an apology.  I haven't forgotten you.  HONESTLY, I haven't.  I will accept these beautiful awards officially and hopefully, sooner rather than later.

I had fully intended to accept these awards along with the introduction of the FRIENDS & FOLLOWERS award however the post was already gettin' a little long and those awards both require me to write stuff about myself or answer questions or both.  I just thought I'd give my readers a bit of a break from the novels I've been postin', as of late.  I do hope you'll understand.  Really, I do.