when good men do nothing 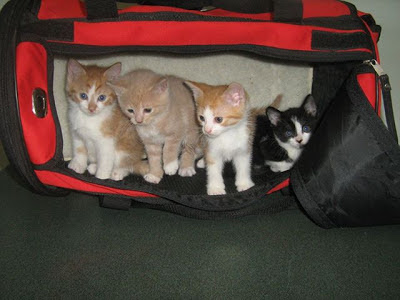 A very wise man named Edmund Burke once wrote, "The only thing necessary for the triumph of evil is for good men to do nothing."  He may have written that hundreds of years ago, but it still applies today.  Wisdom transcends centuries.

Said woman, found the kittens in a carrier on the side of the road, by her house.  Had it been either one of my peeps who had found those precious babies, they would have scooped them up, right there and then, and taken them to safety 'cause...  well...  'cause that would have been the right thing to do.  But this woman didn't do that.  Instead, she left them there.  Just left them there, by the side of the road.

Said woman, refused to take the kittens inside, to safety.  She refused to pick up the carrier and take it away from the side of the road.  She didn't want to keep the kittens.  Well, that's okay.  No one was expecting her to keep them.  But, nevertheless, my peeps and I would have expected her to take them to safety.  All she had to do was pick up the carrier and bring it into her yard - where they would have been much safer than they were at the side of the road - before calling Animal Control.  Animal Control would then have taken these precious babies to the Companion Animal Protection Society where they would be cared for and loved before bein' put up for adoption.

Instead, said woman came and got my peep.  She refused to call Animal Control herself, which peep #1 found to be very odd and just a little suspicious.  She had so many excuses and not one, single, actual reason.

When ol' peepers realized that the kittens were still at the side of the road in that carrier, she flew into action.  We had a friend visitin' and he went with the woman to go save the kittens.  He went, I think, 'cause my peep was gonna walk over.  She didn't want to get into the same car as the woman.  She didn't wanna hear any more excuses.  My peep was mad.  Mad, mad, mad...  Mad as a mad hatter.  Mad as a mad hatter squirrel wearin' a mushroom hat, made of questionable mushrooms.  Ever seen one of those?  I have.  It's pretty scary.

Now, here's the difficult part...  Edmund Burke also wrote, "Nobody made a greater mistake than he who did nothing because he could do only a little."

The woman did come and get my peep and, for that, I am truly grateful.  At least she did something.  Something is always better than nothing.

But I still have a serious problem with the fact that those kittens were left in that carrier by the side of the road, unattended.  In a matter of seconds, disaster could have struck.  Disaster with disastrous consequences.  They could have been run over, either accidentally or intentionally.  They would have died right then and there.  Had that happened, that would have been that woman's fault because she could - should - have moved the carrier to a place of safety.  I know for a fact that there are four dogs livin' in our subdivision who are allowed to roam, occasionally.  What if one of those dogs had come across the kittens?  They wouldn't have been able to escape.  They could have been mauled to death.  That, too, would have been that woman's fault for she should have moved that carrier to a place of safety.  And I know that that woman COULD have moved the carrier to safety.  I know that she was perfectly capable of movin' it.  There was nothin' stoppin' her from doin' the right thing except for the fact that she didn't want to do it.  Her excuses for not doin' so were exactly that...  excuses.  I, Nerissa the Cat, know the difference between an excuse and a reason and I heard no reasons that day.

Even though doin' something is better than doin' nothin', should we not, still, always strive to do our best?  Perhaps our best is only a little and, if that is truly the case, then that little must suffice.  But we must never do just a little when we could do more.  We must never do just a little, far less than our best, and think that that's good enough.  Think that that somehow makes us better people 'cause...  it just doesn't.  The world demands more from us.  And when those demands are made, it's our time to shine.  It's our time to shine and do the world proud.  We shouldn't just slack off and think, well...  I did something.  That little something may not have been enough.

Thankfully, there are truly good peeps in this world.  Good peeps who always do their best 'cause they know that doin' their best is what is always best to do.

The kittens are now safe.  They're in the care of the good peeps at the Companion Animal Protection Society...  otherwise known as CAPS.  There, they are bein' loved and well-cared for and will soon, along with fourteen other kittens thrown away this spring, be put up for adoption.  CAPS also has plenty of adult cats, lookin' for good forever homes.  I urge all my readers to take a peek at the CAPS' website.  Just click on the word CAPS and you'll be teleported over in a jiffy.  And, if you live in Nova Scotia and happen to be needin' another furry friend, you just might find yourself a real cutie over there.  Bet you will...  Yup, I just bet you will...  'cause matching up cute furry friends with peeps and other cats is what CAPS does best.  purrs

Posted by Seville at Nerissa's Life at 12:57