way past my bedtime 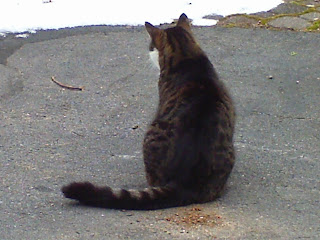 I had to keep a close eye on that ol' man winter.  He kept wanting to stick around.  I think he thought he had squatters' rights or something.  Finally, I put my paw down and said, "Mr. Winter...  GO AWAY!"  He must have listened 'cause I do believe he has finally gone.  Watched the last of the snow receding the other week.  And boy-oh-boy...  talk about a dawdler!  I thought I was watchin' a glacier move, or somethin' like that.  Yup.  It took that long.  Had to have a few naps in between spells of watching it leave.  There's still a little mound of the stuff in front of the garage, where the snowplow guy piles it high when he does the driveway, but that will go soon enough, I think.  It had better go!  I've had just about as much of the white stuff as I can take for a bit.  I'm ready for spring and all that it brings. 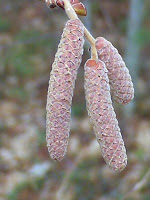 You know, I've been doin' my daily garden inspections and have found that the garden is ready for spring, too.  For quite some time now, the hazelnut bush has been blooming.  At least I think it's bloomin'.  Ol' peepers says they're blooms but they don't like flowers to me.  For starters, they're brown.  Who ever hear of brown flowers?  I mean...  sure, if they're all shrivelled up and dead 'cause the peep forgot to replace the water in the vase...  well then...  yeah, brown is to be expected.  But when they're still alive on the bush, one expects to see a little colour or something.

To be honest, I don't know if the hazelnut is a bush or a tree.  It kind of looks like a bush but it's gettin' super tall, like a tree.  Maybe it's a really, really tall bush.  Or perhaps it's a really, really short and squat tree.  I don't think it knows what it is.  But whether it's a bush or a tree, I sure am hopin' it will bear some nuts this year.  I'm thinkin' we might be in for an especially good season of squirrel TV, if it does.

And as those of you who follow me on Facebook already know, I've been watching the daffodils very closely, waitin' for them to bloom so that I can pose with them and have the peep take my picture.  So far, the only ones to bloom are little jonquils growing in a pot in the house.  MOUSES!  They're just tiny and there aren't enough of 'em for proper posin' material.  The peep likes 'em, though.  Personally, I'm waiting for the big ones to bloom outside.  Those are the best ones to use in my picture posing sessions. 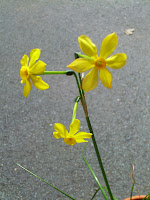 The peep has been paying attention to the arrival of spring, too.  Lately, she has been hauling potted rose bushes out of the garage each morning and hauling them back in, every night.  Seems like a lot of foolishness to me but she thinks it's necessary.  I'm not sure that roses think so, though.  They're already fighting back, you know.  Just yesterday, one of them gave ol' peepers her first rose bush scratch of the season.  I say first 'cause I'm sure there will be many more to come.

I've also noticed some additional roses in my office.  It's okay, I like to look at 'em when I'm workin' on my blog.  I think the peep is gonna pot 'em up in bigger pots to go outside when it's warmer.  You know...  once spring has been around for a little longer and whatnot.  And once the nights are warm, too.  The nights are still pretty chilly.  Too chilly for roses in full bloom, I'm afraid.

I'm lookin' forward to warmer nights, as well.  I like getting to be out in the evenin'.  The other night, I stayed out until almost midnight!  That's way past my bedtime but it was still on the mild side and I was havin' so much fun that the peep let me stay out late.

I wasn't alone.  My brother Seville was with me and we played and we played and we played.  We chased each other around the driveway and then we chased some leaves 'cause there was a bit of a breeze and some old leaves that never got raked up last fall were blowing around.  I love chasing leaves!  It's one of my favourite things to do, you know.  The peep left the light on by the side door so that we wouldn't be in total darkness.  That was good, I think, 'cause it was too cloudy for there to be much moon or starlight.  We had such a great time!  I wanna do that again and really, really soon. 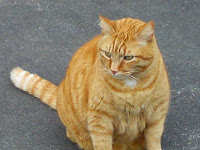 I'm so looking forward to more evenings like that.  I'm gonna ask the peep if I can have a later bedtime, I think.  After all, it is my birthday in just a few days and I'm gonna be ten!  That's like...  mid-fifties in peep years.  Surely when one is in their mid-fifties, one should be able to stay up later at night.  I mean...  ol' peepers isn't even that old.  If she's allowed to stay up past midnight - and she is - then I should be allowed to stay up past midnight.  I really think a later bedtime would be appropriate.  Don't you agree?
Posted by Seville at Nerissa's Life at 11:08