The other day, it snowed.  I couldn't believe it.  It's spring, now, and in the spring...  there shouldn't be any snow!  No, there should be soft breezes and warm sun puddles and daffodils and the like.  There should NOT be snow.  I don't know what's goin' on with this weather thing but I think I'm gonna have to do somethin' about it.

But when it snowed the other day, I decided to make the most of it.  You know, make some lemonade out of those lemons.  I didn't want to play in the snow or anything like that 'cause I was kind of annoyed it was there, in the first place.  I didn't want the snow to feel like it was welcome...  'cause it wasn't.  It wasn't welcome at all.  But I figured there wasn't much I could do to get rid of it although I am workin' on plans for a highly technologically advanced getting-rid-of-unwanted-snow apparatus.  I suspect that my GROUSA invention will make me famous, some day.  Don't tell anyone though.  It's kind of a secret.  Haven't got my patents, yet.

Anywho...  back to makin' the most of the snow.  There was just enough snow on the ground to make some tracks and as luck would have it, some cat had done exactly that.  I figured this was the perfect opportunity for me to hone my tracking skills.  They might very well come in handy now that I'm an official FBI agent.  That's right...  I have been accepted into the Feline Bureau of Investigation.  I have my own badge and everything.

I'm still learning all the ins and outs of the FBI.  I believe I am what is called a "newbie."  But the Feline Bureau of Investigation is better than that Federal one, I should think.  We have no borders.  We're an international organization.  We're completely autonomous and just a little indifferent...  'cause we're cats.  We answer to no man... or woman or child.  'Cause after all, we're cats!  But I digress... 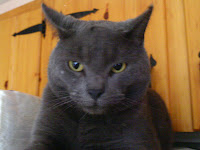 Like I said, I had discovered some tracks.  And I took a good look at those newly discovered tracks in the newly fallen snow and said to myself, "Hmmm...  a cat has been here."  I sniffed the tracks for a moment but didn't smell anything out of place.  Obviously, they were not the tracks of my nemesis, Nosey Neighbour Cat.  I am sure I would have smelled his tracks from a mile away, never mind a mere few inches.  No, these tracks must have been made by a cat with whom I am close.  Someone who has full access to my house and garden and is actually welcome there.  Someone in my immediate fur-family.

To hone my sleuthing skills, I knew I needed to find out exactly where the tracks led.  That's what tracking is all about, you see.  It's kind of the basic principle.  I decided to do my tracking in stealth mode.

So, step by step and paw by paw, I tracked those tracks, always stepping inside an already made paw print.  I was so careful.  So very, very careful.  In fact, I was quite amazed at how well I did it.  I was also surprised at how easy it was.  My paws fit perfectly in the paw prints and the spacing of those prints matched my stride exceptionally well.  I immediately deduced that the tracks had not been made by my sister, Tobias, nor my sister Tess.  They are both quite small cats and therefore have a smaller stride than I.  Gosh, I was getting good at this sleuthing work, I surmised.

The tracks took me to the far end of the garage, where they veered left.  I veered left as well, still hot on the trail of the cat who made those tracks.  At the front end of the garage, the tracks veered left again.  I wondered if I would discover whomever I was following when I turned that next corner but no such luck.  He or she was nowhere to be seen.  Just more tracks.  I continued to track the tracks and turned left, once more, at the next corner.  I must admit, I was a little surprised by what happened next.  The tracks led me to exactly where I had begun. 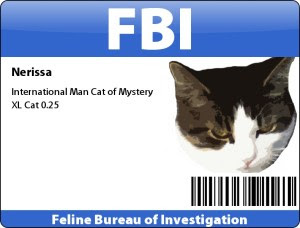 That's when ol' peepers walked past and she asked, "Nissy, why do you keep walking in circles around the garage?  Are you doing laps or something?"

And that's when I realised just how good I was at this sleuthing business.  I had been tracking myself, all along, and hadn't even known it.  Clearly, this had something to do with my stealth mode capabilities.  Clearly, I was even stealthier than I had known.  Perhaps I was the stealthiest cat ever.  Or...  perhaps...  I had just forgotten that those were my tracks.  I should get myself a little notebook to record such things, I think.  Yup.  I bet investigators use notebooks all the time.  I'll get ol' peepers to buy me one next time she's out shopping.  Or maybe I can order one on-line.
Posted by Seville at Nerissa's Life at 10:36