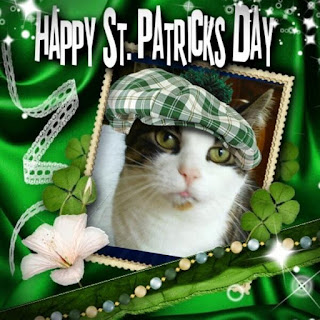 Spring had arrived.  It was a whole ten degrees above zero and the sun was shining.  A soft breeze tickled my whiskers as I did my daily inspection of the garden.  The daffodils were sproutin' and the primroses were greenin' up and I could hardly wait till their blooms were bloomin' with bright colours and fillin' the air with sweet scents.  That was Wednesday.  Two days later, it snowed.  MOUSES!

I awoke Friday morning, ready to head out into the garden but stopped dead in my tracks when I looked out the window.  All I saw was white.  On the ground, in the sky and everywhere in between.  How could this be?  Where was spring?  Had someone chased it away?

I knew I had a mystery on my paws and more importantly, I knew that that mystery needed to be solved.  I called out to peep #1.  "Peepers!  Prepare the teleportation device."

My brother Seville came running.  "Nissy, Nissy...  You promised I could tag along on your next adventure," he reminded me.  Never let it be said that I break my promises.  It was settled, Seville and I would head off in search of spring, together.

The peep was lookin' mighty sheepish as she explained how she couldn't find our teleportation device.  Apparently, it was lost.  Perhaps it had teleported itself off to some remote location, she suggested.

"That's not how it works!" I cried in frustration.  "The device stays put," I said.  "The teleportee, teleports...  not the teleporter."  The peep shrugged and headed off.  What a peep.  MOUSES!

Seville and I exchanged glances before heading into the kitchen cupboards.  Obviously, we were gonna have to build our own teleportation device.  Bowls, an egg beater, fryin' pans...  hmmm...  what else?  Ice cubes!  I instinctively knew that ice cubes would be necessary for this adventure.  Seville boosted me up so that I could reach the freezer section of the refrigerator.  I got the door open just as a whole whack of stuff came tumbling out.  Clearly, the peep had been negligent with her keepin' of the refrigerator tidy duties.  We rescued the ice cubes and put them in one of the frying pans.  "Now...  let me think 'bout this...  anything else?" I asked.

"How 'bout a garden hose?" asked my brother.

"Really, Seville?  A garden hose?  Don't you think that's kind of silly?  Why would we need a garden hose to build a teleportation device?  But I'll tell you what we could use and that's a ladder.  But just how are a couple of cats gonna haul a big ol' ladder out of the garage.  Hmmm..."  I had my answer before I had finished askin' the question.  Seville and I would build our teleportation device inside the garage.  We hauled the necessary buildin' materials out to our new location.

A little while later, my brother and I looked up at our masterpiece.  Was it gonna work, I wondered.  It didn't look like our old teleportation device.  To be honest, it looked kind of precarious.  It looked a little on the wobbly side.  Of course, it was held together with peanut butter and sticky toffee.  "I'll head up first," I bravely said.  "Seville, you rev up the egg beater."

I began my ascent.  I was almost at the top of the device when I mistakenly put a paw in the frying pan holdin' the ice cubes but the ice cubes were no longer there.  Had they teleported?  Nope.  Turned out they had melted.  I slipped and I skidded and I tried to grab a ladder rung with my tail but that didn't work 'cause my tail lost its grip and I came tumblin' down.

I bounced off the bottom ladder rung and Seville tried to grab me.  The velocity and power of my bounce was such that he couldn't hold me down.  No, instead he came along for the ride.  Together, we soared across the garage before landing in a potted rose bush.

I struggled to stand up on my paws but something was holding me down.  I felt dizzy and there were stars spinning 'round my head.  SUCCESS!  The teleportation device had worked!

I momentarily saw a host of golden yellow daffodils and warm rays of sunlight and a little man dressed all in green holding a calender in one hand and watering a flower bed with the other.  And the sun shining through the spray of water was creating a beautiful rainbow.  Hmmm...  imagine that.  Maybe we did need that garden hose after all, I thought.  Then everything went dark.

I opened my eyes to find Seville peering down at me.  "You okay, Nissy?  You took quite a tumble there.  Thought we cats were supposed to always land on our paws."

"Under normal circumstances, yes, we do.  But add the science of teleportation into the mix and who knows what will happen," I explained.  I stretched a hind leg and gave the root of my tail a rub.  "Are you okay, Seville?"

"Oh yes.  I landed on top of you and hardly felt a thing.  By the way, you've got a bit of rose bush stuck in your fur."

"Thanks," I muttered.  "The good news is, I saw spring.  I was there.  It's bein' held hostage by leprechauns, I think.  But it looks like they're gonna free it in a few days.  I saw a calendar with March 20th, circled.  That's this Wednesday so we won't have long to wait.  We might need to fill a pot with some gold, though.  Don't know why I think that.  I just do."

My brother and I headed back into the house.  We headed back in with a mission in mind.  We needed to find our old teleportation device.  Our new one appeared to be broken.  MOUSES!
Posted by Seville at Nerissa's Life at 10:09