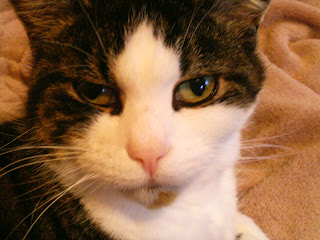 So this is 2013.  Pretty good so far, I should think.  Of course, the year is less than a week old but still, things appear to be on track.

Everyone is busy makin' their new year resolutions and stuff.  Well, by everybody, I really mean, peeps.  Not necessarily my peeps but just peeps in general.  Peeps seem to be way more into making resolutions than cats.  It's kind of a peep thing, I think.  And I suspect some of those resolutions have already been broken.  After all, the peeps have had almost a week now in order to break 'em and you know peeps...  they break stuff all the time.

Although I haven't made any resolutions, I have set myself a challenge.  I'm gonna participate in the Personal A to Z Challenge.  What is that you ask?  Well, have a seat, put your paws up for a bit and I'll tell you all about it.

Remember...  way back in 2012...  when I was given the Blog of the Year award?  You remember, don't you?  I know it was a long time ago.  At least a couple months now.  Cats and peeps who were given this award could join a special group.  Quite exclusive, really.  Very much an honour, to be sure.  Well, in this group, I met a very nice blogger named Julie Fox and she had set up a challenge for herself and suggested others might join in.  Pretty interesting, huh?  I thought to myself...  I can do this!  So...  I am!!!

The idea of the challenge is to create a theme and to blog 'bout stuff within that theme usin' all the letters in the alphabet.  Right away I knew what theme I would use.  I would use words.  I love words.  I use 'em all the time.  And you all know how I like to make up my own words, right?  I do that all the time, too.  The peep chastises me for doin' so but I just ignore her.  Anywho...  I figure that if I make up words, cats and peeps out there will use 'em.  And if enough cats and peeps use my made-up words, eventually...  my very own words will end up in Websters or something.  What a plan!  Yes, just one more way in which we cats will take over the planet.  Hehehe...

So without any further ado...  A is for autocatphalous.

You may have heard of the word autocephalous before.  Or maybe not.  The various spell checks sure haven't.  I'm seein' red squiggles and yellow highlights all over the place here.  It's a pretty big word.  According to my three-volume Websters dictionary it means independent, self-governing and not under the jurisdiction of another...  or somethin' like that.  It has stuff to do with churches.

Well, I took one look at that word and realized that if there was anyone or anything more independent than even the most independent of independent churches, it's cats!  And we're self-governing, too.  Not to mention self-grooming.  We cats are certainly not under the jurisdiction of another anything except maybe another cat.  We're definitely not under the jurisdiction of another species.  The peeps like to think they're in charge but come on...  we all know the truth.

So we now have a new word...  autocatphalous.  And what does it mean, you may ask? 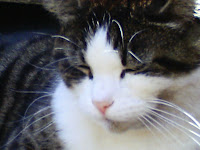 Here in my house, the state of the autocatphalous society has been recognized for quite some time.  We just didn't have a word for it until now.  Sure the peeps throw around silly little phrases like "be good" when they head out or "love one another" when there's a hissy-fit going on.  They like to say stuff like that to make themselves think they're tellin' us what to do but facts are facts.  We cats are independent by nature.  If we wanna be good, we'll be good.  If we don't, we won't.  The peeps can't tell us what to do.  That's just the autocatphalous nature of the world, I'm afraid.  It's life.  Live with it.

So there you have it...  the first of twenty-six parts to my Personal A to Z Challenge.  I'll add more posts for this challenge periodically.  Probably a couple a month.  Now, if you'll excuse me, I've gotta go make up a word that starts with the letter B.  Hmmm...  B is for...

Posted by Seville at Nerissa's Life at 10:15