the next big thing

A couple of weeks ago, I made a new friend.  His name is Jet and he's a dog.  He's a jet-black dog.  Bet that's how he got his name and all.  Anywho...  my new friend Jet has a blog called Hey... It's Jet Here.  I think that's a really neat name for a blog and the blog itself is super-duper neat, too.  You've just gotta check it out.

Jet bestowed a great honour upon me.  He gave me The Next Big Thing award and I didn't have it yet so, as you can imagine, I was pretty darn tootin' excited.  Jet says that Nerissa's Life could be the next big thing and I sure do hope he's right.  From readin' his blog, I can tell he's a very smart dog so there's a real possibility that he is right and all.

In accepting this award, I need to nominate five other blogs that I think are amazing and could be the next big thing in some way or another.  This was really hard.  My preliminary list had about twenty-five blogs on it.  Maybe even more.  Unfortunately, I had to narrow the list down.  MOUSES!  I'm hopin' that eventually, everyone to whom I wanted to pass along this award will receive it from someone and receive it soon 'cause they all deserve it.  Yes sirree they do.

And the nominees are...  Drum roll please.

Jacob at The Cats Forever Daily.  This is a pretty new blog, I think, and although it's all about cats, it's written by a peep.  Jacob passes along really useful information about caring for cats whether they be your own cats or cats who need help in some way or another.  He provides lots of contact information for when you know of a rescue that's lookin' for a home for one of our four-footed friends.  He's really gettin' the word out 'bout these cats who need aid and that's so very, very important.  This blog is helping save cats' lives.

Texas at Texas, a Cat in New York.  Texas is a pretty neat guy.  I think it's neat that he lives in New York 'cause I live in New Scotland although we call it Nova Scotia.  Means the same thing though.  Must be different livin' in a city like New York.  I can live vicariously as a city cat when readin' Texas' blog.  Love that!

Basil at Basil the Bionic Cat's Blog.  I met Basil a while ago through his mom.  Yeah, I met his peep before I met him.  Basil is really into psychology and whatnot and that interests me, too, so I find his blog super-duper interesting.  I think you will, too.

William at William of Mass Destruction.  William has been blogging for eight years.  Yeah...  that's what I said.  EIGHT YEARS!  Wow!  I think that's amazing.  Lots of cats out there aren't even eight years old.  I'm only nine myself although I will be ten this spring.  William brings eight years of experience to the blogging table so you know his posts are gonna be great.


I sure do hope you all visit all of the blogs I've nominated.  It will be well worth it.  I PROMISE!

But I'll tell ya who won't be getting The Next Big Thing award from me and that's the peep.  You might have heard 'bout this.  Peep #1 has her own blog now.  Nothin' much to talk about, really.  The stuff she's putting on there isn't even new stuff.  It's old stuff.  Stuff from before.  Stuff that has been previously published and whatnot.  She says she might do up some new stories for it but we'll see...  I'm still waitin' to read that novel of hers. 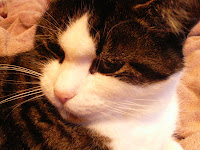 I really don't think The Peep's Cheeps is worthy of bein' nominated for this award 'cause firstly, like I said, the stuff is all old.  Secondly, the peep really needs to face the fact that I'm the writer of this family...  not her.  I mean...  sure, she's useful when it comes to filling in as my typist when my paws get tired or proof-reading my stuff and whatnot.  But she can also be a bit of a pain in the tail when it comes to the proof-reading business.  She's always criticising me when I make up my own words.  Somebody has to make up new words, right?  Why not me?  And you should hear her go on and on and on 'bout when I start sentences with "and" and "but."  But I told her point blank that I do that 'cause my readers like the colloquial style of my writing.  Then I had to explain what colloquial meant to her.  MOUSES!

Anywho...  the peep's new blog is called The Peep's Cheeps.  Pretty silly name, huh?  Yeah...  I thought so too but she seems to like it.  The woman has no taste.  You can always check it out if you like.  I've provided you with the link.  But there's no way...  no way on Earth or any other planet out there...  not even on Pluto and that's not even a planet anymore..  that I'm nominating her for this beautiful The Next Big Thing award.  No way at all.

Posted by Seville at Nerissa's Life at 10:26