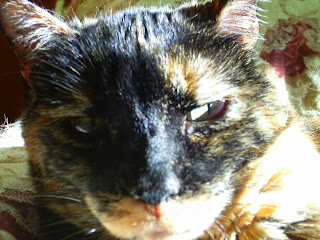 The following is a true story, told to me by my peeps.  My Auntie Primrose denies every word.

It all started with a bug.  At first, no one knew of the bug's involvement.  All the peeps knew was that my Auntie Primrose had a sore paw.  A very sore paw.  She wouldn't put her weight on it or anything.  Not even a little bit.  So, off they all went to see the doctor.

As soon as they got to the doctor's office, the first thing Auntie Primrose did was position herself in the middle of the waiting room floor.  She kind of perched herself up so that she was almost standing on two legs.  Yup...  that's right...  you saw that one coming...  she pooped right there in the middle of the floor.  The peeps saw it coming, too.  So did everyone else in the waiting room.  The doctor saw it when he poked his head around the corner.  Then he came in and cleaned it all up.

After that, the doctor - and we'll call him Dr. #1, to keep his identity a secret and protect his pride - saw Primrose right away.  He looked her all over, examining the paw very carefully.  "She has been bitten by a bug," said he.  "She'll be fine."  Peep said he prescribed some sort of children's allergy medication just in case...  but he was right...  she was fine...  for a while...

A week or so later, my Auntie Primrose stopped eating.  She didn't want to drink, either.  And she kept doing this funny thing with her mouth like there was something caught in her throat.  The peep cried out, "Oh no!  She has swallowed a piece of yarn or an elastic or something else evil and treacherous."  Yeah, I know it sounds a little melodramatic but I'm only repeating what the peep told me.  This all happened years ago.  Anyway, the peeps were really worried.  They always try to keep evil and treacherous things out of our reach but you never know...  we're pretty clever when it comes to finding stuff.  So, off everyone went to the vet again.

The first thing they noticed at the clinic was that there was no Dr. #1 anymore.  He had left.  Gone to work with the Department of Fisheries or something like that.  Yeah, he took a job looking after fish!  Why do fish need doctors?  I would think think they'd be more likely to need a cook.  I mean, that is what's needed when preparing dinner, is it not?

So this time, my auntie was seen by another doctor and we'll this one Dr. #2, in order to protect her identity.  Dr. #2 looked in my auntie's file and said, "She must have eaten that bug."  Apparently, when swallowing the bug, its exoskeleton scratched the lining of my auntie's throat and caused a bit of an infection.  So, of course, antibiotics were prescribed.  Peep #1 was quick to point out that if Primrose refused to eat, there was no way she was gonna be able to pill her.  That's when the doctor suggested a shot.

Well, the needle went into a muscle and apparently, it hurt...  A LOT!  There were cries and howls and peep #2 - the coward - fled the exam room crying, "I can't deal with this!".  Next thing peep #1 knew, my Auntie Primrose was on her head.  And since the peep's head is rounded at the top, Primrose had to dig in with all claws so as not to fall off.  There was peep #1, standing in the middle of the room with a cat perched on her head and blood dripping down her face.  Don't worry, it was just the peep's blood...  not my auntie's.

Around this time, another doctor arrived to help.  Well, I guess Primrose didn't like the look of two doctors in one room 'cause she took a flying leap from the peep's head right across the room to a counter top where she hissed and spit and did what any self-respecting cat will do when scared...  poop.

It must have all been was too much for the doctors, 'cause they both left the room to give Primrose a chance to calm down.  For the rest of the afternoon, they saw all their patients in the operating room  - or someplace silly like that - 'cause the exam room was occupied by the peep and my auntie.  Eventually though, Primrose was okay and let the peep pick her up and everybody went home.

But do you know what?  The next time they went to the doctor's office, Dr. #2 was gone, too.  She had up and left.  Uh huh.  Left to go back to school to learn more about birds.  Again, I ask...  why do birds need doctors?  Why are all these doctors wanting to look after my dinner?  I don't understand this one bit.  Makes no sense to me!

Posted by Seville at Nerissa's Life at 08:30