I can't believe I won an award! 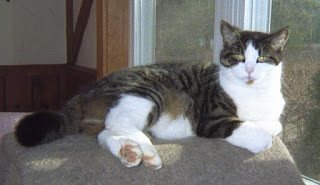 Can you believe it?  I won an award!  It's called the Liebster award and was given to me by my friend Mario from Mario's Meowsings.  I can't believe it!  I actually won an award!

I didn't even know there were such things.  I mean...  sure...  I've seen the stuff on TV with the red carpets and whatnot.  But those are for actors.  Very rarely do you see a cat at the Oscars.  And that's wrong...  don't you think?

Come to think of it, the first peep has won a few awards at her garden club.  They have these flower show shindigs.  But I never get invited to those ceremonies.  And that, too, is wrong...  don't you think?  I mean, really!  It's not like I don't help her with the gardening.  I dig.  I dig things up.  Sometimes I might even fertilise a plant or two.  Obviously, I'm a great helper in the garden.  Perhaps those ribbons she gets should be for me!

Well, anyway, I'm just so darn tootin' pleased with my award that I had to publish a special post thanking Mario for thinking of me.  Below this post, you'll find a link to his blog.  And if you're looking for my post, "spit and polish" it can be found just below that.  You've gotta check it out.  My sister Constance was really pleased to have her picture appear in my blog this week and wants EVERYONE to see it.  She's a very pretty girl.

Anywho...  I must now find five blogs to award the Liebster award to myself.  That's right!  The fun isn't over.  I won and now I get to find five more winners.  Oh, what a great day!!!
Posted by Seville at Nerissa's Life at 13:52